A short but sad story about the adventures of a parcel traveling from the United States to Austria.

We always thought that launching the satellite into orbit was one of the trickiest parts of this project. All wrong! The adventures that our TubeSatKit is having on its trip from Mojave, California to Graz, Austria are legend.

On September 7th 2010 a parcel measuring aprox. 40x40x15 centimeters was handed over to trustworthy officials of the United States Postal Service® by Randa Milliron from IOS. The Detailed Description of Contents (enter one item per line) on the Customs Declaration and Dispatch Note states Electronics KitTubeSat (Academic), Qty. 1, Value (U.S.$) 300.00. And off it went to Austria; (presumably) by plane. 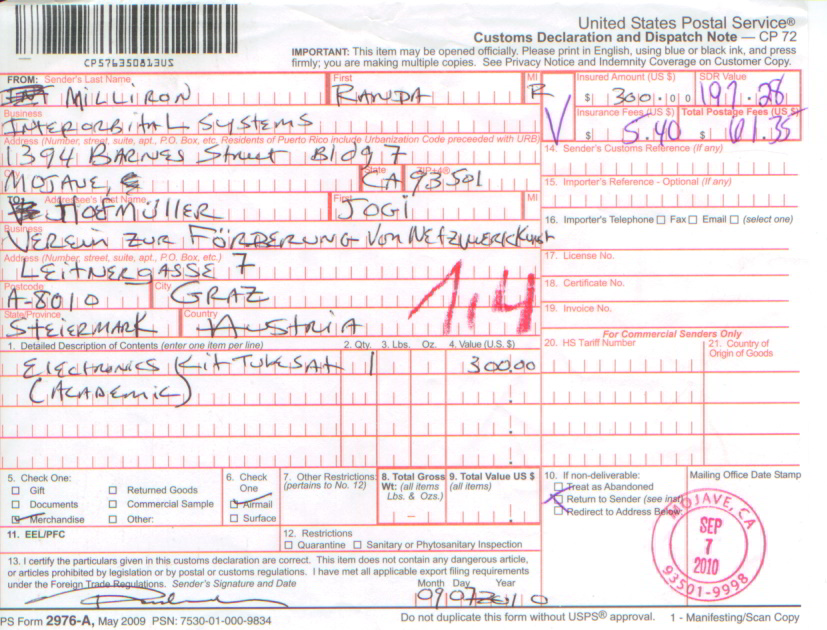 Not even a week later (around September 13th) the parcel had arrived in Vienna. To its great surprise it was held back at the Auslandszentrum Wien (AZW) and put under quarantine. A suspicious customs officer mistrusted the above mentioned Customs Declaration and Dispatch Note and issued a Zollbenachrichtigung. The latter form requested proof of payment and/or an invoice to free our parcel from quarantine. 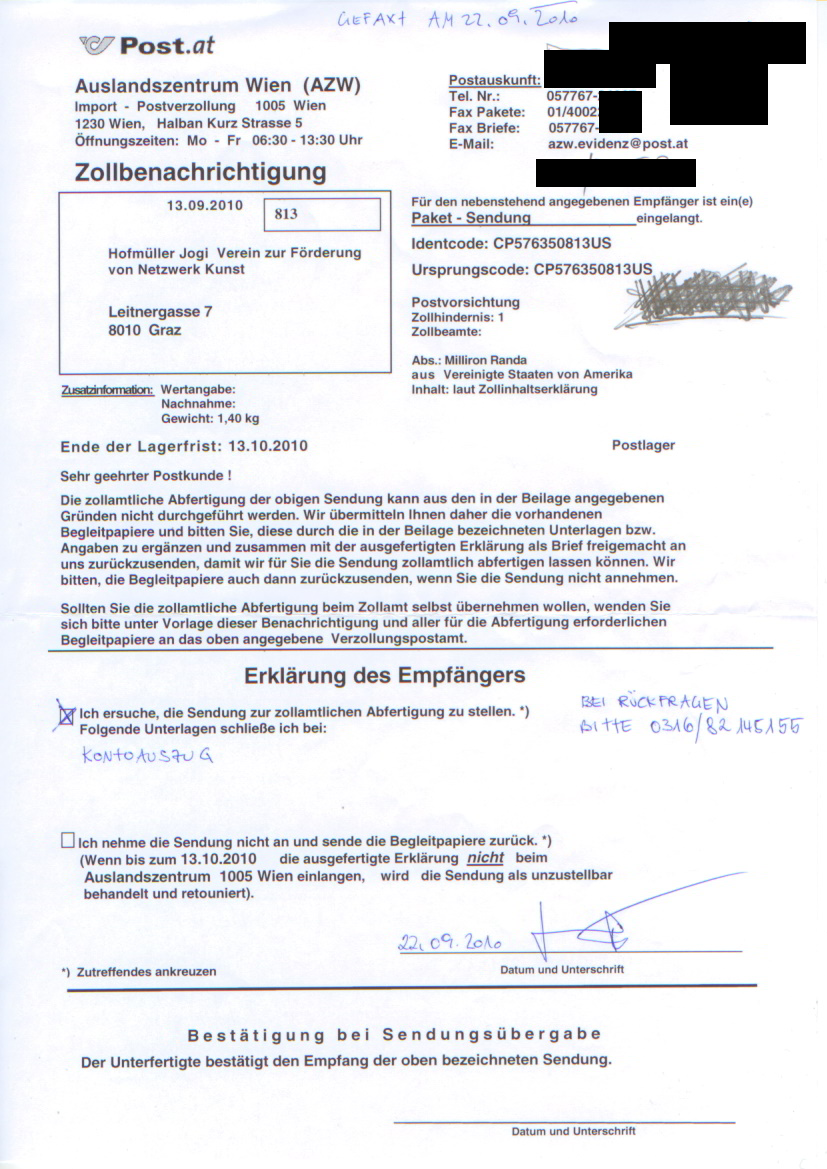 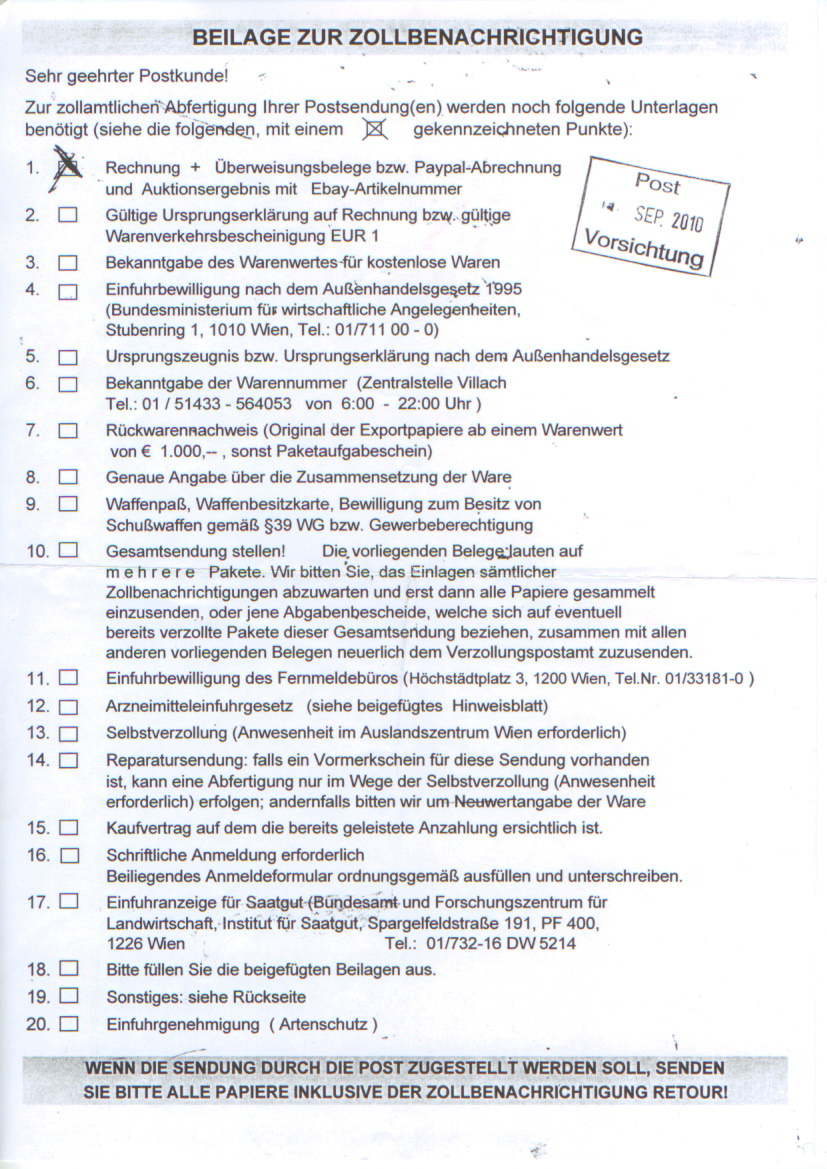 Eager to receive our parcel and not thinking about Murphy's law we faxed the bank statement containing the line that proofs the payment to IOS on September 22nd. Our patience had to hold until Friday, September 24th when a mailman presented our parcel! Just in time for the project meeting this afternoon was our first thought. All wrong! Mr. mailman had to collect a total of € 687.40 for customs fees before handing over the parcel. If we had had the money (in cash) we would have paid the ridiculous amount. Luckily we never have that much cash in the office.

Refusing the payment of € 687.40 meant that the parcel had to go back to a local post office (the one responsible for zip code 8018 to be precise) to spend the weekend there, together with all the other parcels and letters that didn't make it to their final destination.

A phone call to the Auslandszentrum Wien (AZW) later we were one bit smarter. We received the explanation that You can write whatever price or value you want on this Customs Declaration and Dispatch Note. We need an invoice to have proof of the contents value.. The thought of also being able to write whichever amount one chooses on an invoice never seemed to have crossed this person's mind.

Luckily and finally we found a competent person named Mrs. Grasmuck. She explained how the procedure of Zollrichtigstellung was supposed to work. IOS was kind enough to provide all the neccesary papers in no time.

Go Back One Step

The sad consequence for our long awaited parcel is that on Monday, September 27th it had to travel back to Vienna to Auslandszentrum Wien (AZW), wrapped in a new coat of brown paper and accompanied by paperwork to explain its contents and proof its real value. All this triggered a procedure that according to the official at the local post office (yes, the one for zip 8018) has not occurred for some 20 years.

A brief converstaion with Mrs. Grasmuck from Auslandszentrum Wien (AZW) on Thursday, September 30th 2010 revealed that now everything seems to be OK. The parcel has been processed again and will leave Vienna the same day. Customs fees have been reduced and we are looking forward to getting the parcel (again).

The Eagle has landed

On Friday October 1st 2010 at a quarter past 2pm (2:17pm) a postman delivered the parcel! He was accompanied by an apprentice who was eager to learn everything on customs procedures. Oh, we finally ended up paying € 50.08 in customs and handling fees; but we are so glad the parcel has landed. 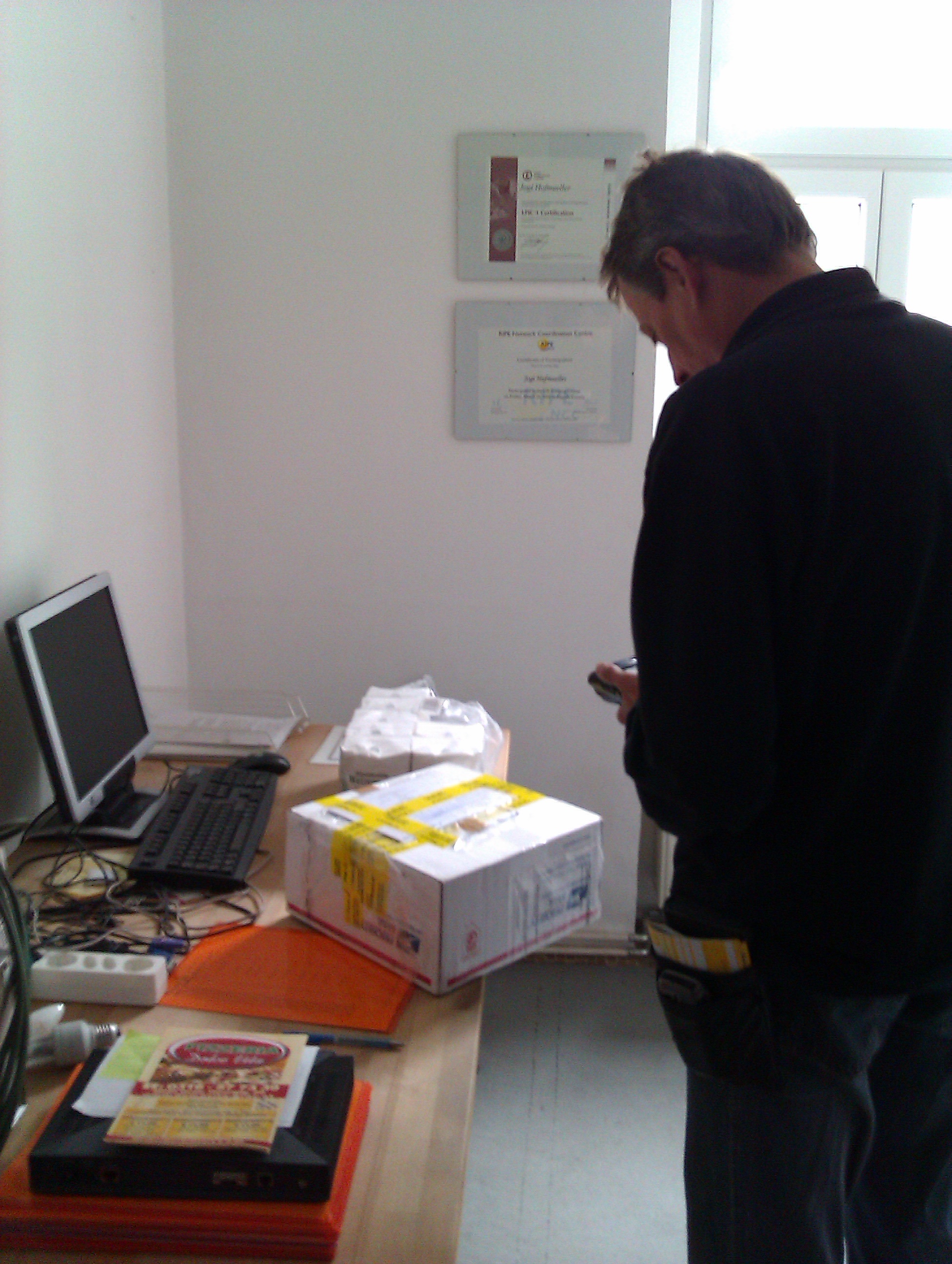 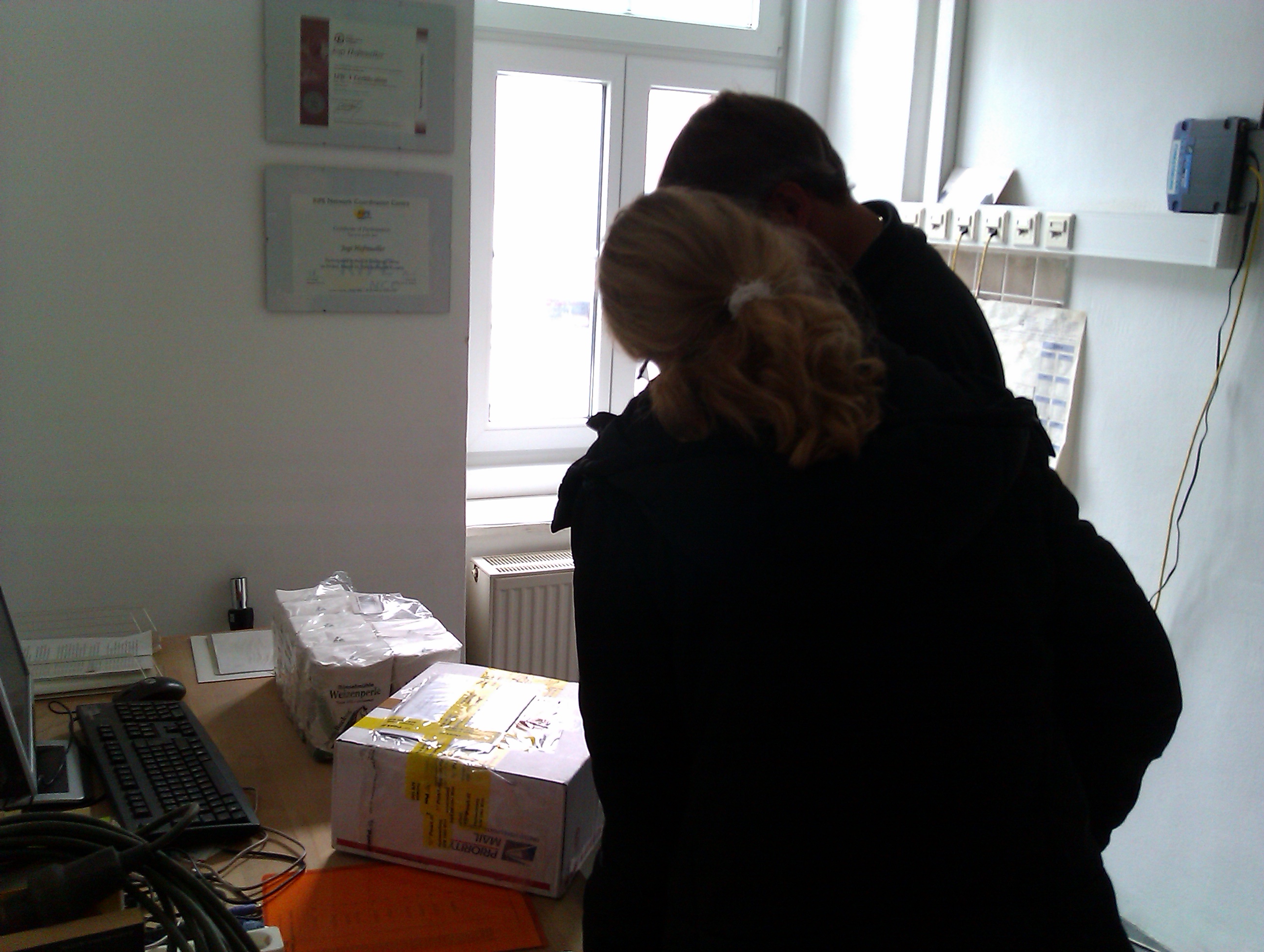 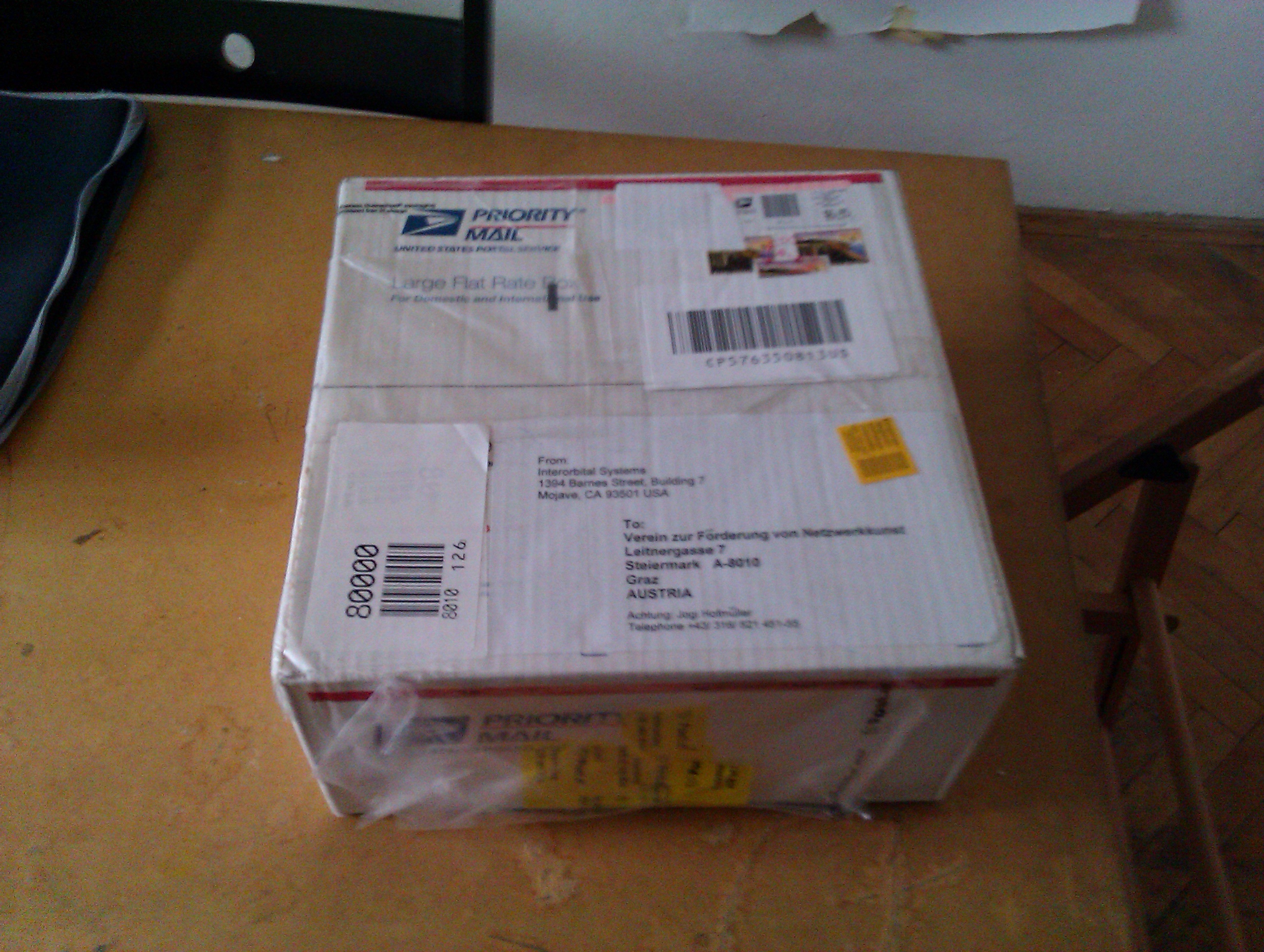